Bachelor Degree in Tongji University of Engineering; Master Degree in East China Normal University of finance. Currently cover automobile and air sectors. Having worked in research for years and is good at combining analysis for the companies with industry prospects.

As a domestic leading enterprise in the automotive braking field, the Company takes the initiative in the layout of the implementation end of intelligent drive

Founded in 2004, Bethel Automotive Safety Systems Co., Ltd. (hereinafter "WBTL" or the &#34Company") is a tier-one supplier of auto parts. As at the end of June 2022, the Company established ten manufacturing bases and five R&D centers in Anhui, Shandong, Hebei, Sichuan, Zhejiang, and Shanghai, as well as the US and Mexico, with the main production layout of building factories nearby OEMs.

Since its establishment, the Company has been constantly upgrading its business with a focus on the automotive braking field and has continued to make breakthroughs in product lines, ranging from basic mechanical brake products, lightweight parts, and electrical control brake products such as electronic parking brake (EPB), anti-lock braking system (ABS), and electronic stability control (ESC), to wire-controlled brake system (WCBS). In addition, it owns industry-leading independent forward development capacity and has accumulatively obtained 530 patents at home and abroad, including 95 invention patents.

The main customers of the Company include GM, SGM, Changan Ford, Volvo, JMC Ford, DFNissan, Stellantis, Ford, Geely, Chery, Changan, SAIC, BAIC, GAC, BYD, GWM, FAW, XPeng, NIO, Li Auto, and Aion. The top five customers contribute to 45.4% of the revenue of the Company, which shows a high concentration but it is relatively stable. The Company raised RMB620 million through an IPO on A Share in 2018 and raised RMB900 million by issuing convertible bonds in June 2021, which were mainly invested in the R&D of new projects and products. Currently, more than 80% of the revenue of the Company comes from the domestic market while less than 20% is from the overseas market.

The Company has implemented equity incentives and employee stock ownership plans many times, covering senior executives and technical elites in different departments, so as to promote the enthusiasm and stability of the core talent. Besides, a relatively long restricted trade period also displays the Company's firm determination to achieve long-term development, which helps stabilize investors` confidence in the Company.

The Company develops its traditional business with a focus on disc brakes, is making great efforts to develop the lightweight brake part business, and sees a large potential in domestic substitution in its intelligent electrical control business

The Company's history can be divided into two phases. From 2004 to 2012, during the rapid development phase of China's automobile market, the Company mainly focused on mechanical brake products. The Company began to engage in the mass production of brake assemblies in 2005 and realized the mass production of parking brake calipers and vacuum boosters in 2008. Since 2012, due to the slowdown in the domestic automobile market and an increasingly notable upgrade trend of auto consumption, the Company has mainly focused on product upgrades and structural improvements. Specifically, electrical control brake products began to gradually increase. The Company has successively realized the mass production of new products such as ABS, EPB, aluminum steering knuckles, ESC, and WCBS, and became a tier-one supplier of GM in 2019. In 2022, the Company's business field expanded to automotive steering systems, further improving the layout of wire-controlled chassis.

The constant business upgrades have promoted the Company to maintain high growth of its results. From 2013 to 2021, the Company's gross revenue rose from RMB442 million to RMB3.49 billion, with an eight-year CAGR of 29.5%; the attributable net profit increased from RMB32 million to RMB504.5 million, with a CAGR of 41.2%. It can be seen that the profit growth is higher than the revenue growth, showing a steady increase in profitability. 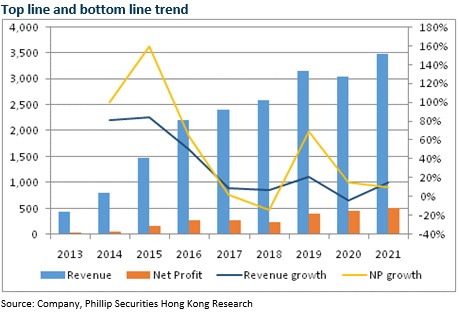 Judging from the revenue structure, among mechanical brake products, disc brakes were the main revenue source of the Company, with an eight-year CAGR of 17%. However, the growth rate and proportion of disc brakes have shown a year-by-year downward trend in recent years and the proportion of disc brakes to the revenue declined from 82% in 2014 to 30.42% in H1 2022, mainly because the downturn of the industry cycle, combined with automotive lightweighting and increased proportions of electrification, led to the replacement of traditional disc brakes by EPB, thus further leading to a decline in the revenue growth. Furthermore, affected by the buoyant costs of raw materials and stiff competition, the gross margin of the disc brake business has somewhat dropped in recent years. However, the project of 50 thousand tons of cast iron and 10 thousand cast aluminum auto parts, which was put into operation in H2 2022 to replace externally provided materials in part, will reduce both procurement and transportation costs and help increase the product margin. In H1 2022, the Company continued to increase 87 projects concerning disc brakes. With the construction of new capacity, we estimate that the business scale of disc brakes will keep a two-digit steady growth and provide stable sources of cash flows for the Company. 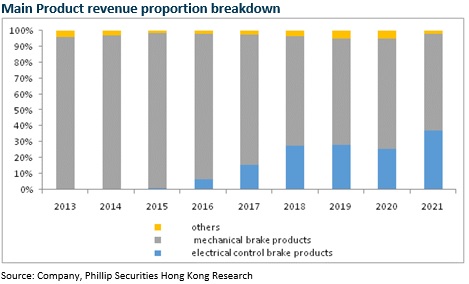 Among the Company's mechanical brake products, lightweight brake components mainly include cast aluminum steering knuckles, holders, and control arms. Compared with traditional cast iron products, cast aluminum products can reduce weight by 40% to 50%. With the ever-expanding automotive lightweighting demand, the Company's revenue from lightweight parts saw rapid growth, with a seven-year CAGR of 71%, and its proportion to the revenue grew from 2.5% in 2014 to 24% in H1 2022. Lightweight parts are the Company's main products for export and their gross margin (over 30%) is notably higher than that of disc brakes. The factory with an annual capacity of 4 million cast aluminum steering knuckles, invested by the Company based on fundraising through bond issuance, will be put into operation in 2023. In addition to reducing customs duties and transportation costs, its global supply capacity is expected to further increase and it is estimated that the overseas revenue from business of the department will see rapid growth. In the global context of carbon neutrality, automotive lightweighting development will enter the fast lane and we estimate that the growth rate of the Company's lightweighting business will reach 30% in the next three years.

The other star department of the Company: The business concerning intelligent electrical control brake products showed a high growth trend. Its revenue jumped from RMB1.725 million in 2014 to RMB815 million in H1 2022, with a seven-year CAGR of 157%. Accordingly, its proportion to the revenue also rose significantly, from 0.2% in 2014 to 39.9% in H1 2022. Specifically, the Company boasts prominent advantages in its EPB business in terms of technologies, products, and customer structure, ranking first among domestic enterprises with a domestic market share of around 8.3%. Currently, the domestic EPB market is still dominated by foreign-invested enterprises. The total market share of the top three enterprises is around 70%, so there is much room for domestic substitution. In 2021, the Company increased 83 EPB projects in 2021 and 34 EPB projects in H1 2022. Besides, there were 59 projects under R&D and 13 new projects for mass production. With the mass production of new models and the release of the new capability of 400 thousand sets of EPB in H2 2022, the sales volume and market share of WBTL are expected to further rise.

Another noteworthy product line of the department of intelligent electrical control brake products is the wire-controlled brake system. Based on its nature of quick responses and lightweight, especially the characteristic of significantly increasing endurance mileage with the recovery of available kinetic energy, it is particularly beneficial to new energy vehicles and makes the standard match for intelligent drive and new energy vehicles of above L2. At present, the penetration rate of wire-controlled brake products around the world is less than 7%, which is expected to reach 23% in 2025. Based on its ESP experience, WBTL became the first enterprise to release one-box WCBS products among local brands in 2019, which broke the monopoly by foreign-invested enterprises. In 2021, the Company realized the mass production of the products, and three models were put into mass production in the year. In H1 2022, WBTL increased 26 WCBS projects under R&D, four projects for mass production, and 34 new projects. Besides, orders in hand have increased rapidly and the shipment from 2022 to 2024 is expected to reach 0.3/1.5/2 million sets, respectively. In terms of capacity, the Company increased four wire-controlled brake lines in 2022. Specifically, the second and third product lines were put into operation in H2 2022 and the fourth and fifth product lines will be put into operation in H1 2023. Consequently, the capacity will be able to reach 1 million sets by the end of 2022. The next-generation WCBS2.0, which can meet the function of automatic driving of L4 or above, is being developed. In the future, the product line is expected to realize mass production.

Besides, there are broad development prospects and huge space for domestic substitution in such product lines as electric tailgate, ADAS, and wire-controlled steering operated by the Company. In H1 2022, the Company increased 13 ADAS projects under R&D, two projects for mass production, and one new project. It is estimated nine more projects will realize mass production in H2. In addition, the Company increased five electric tailgate projects under R&D and three new projects.

Automotive intelligence is a long-term trend in the industry, in which the intelligent electrical control brake field plays an important role. Under the trend of reduced costs of parts, high-quality domestic manufacturers are gradually infiltrating from low-end models to high-end models and are continuously narrowing their gaps with international giants. Once the maturity of technologies and manufacturing process exceeds the tipping point, they are expected to successfully achieve domestic substitution based on cost advantages. As one of a few local enterprises that own independent intellectual property rights and can realize the mass production of EPB, ESC, ABS, and WCBS products, the Company is expected to achieve domestic substitution by expanding customer groups. The intelligent electrical control business is creating a second growth curve for the Company.